The Stirling was the first British four-engined bomber of World War II. This Stirling III version was built by Short and Harland and delivered to RAF 15 Squadron on 23 Apr 1943. It bore the X1D (Identification) of LS-L and was powered by Bristol Hercules engines.

This is Stirling LS-S, a sister aircraft to Stirling LS-L: both were based at Mildenhall.

The Stirling was very agile and praised for its ability to out-turn enemy night fighters and for its good handling characteristics, but its relative poor altitude ceiling was often a subject of criticism.  When Stirlings were on operations with other RAF bombers which could fly higher, the Luftwaffe tended to concentrate on the Stirlings. 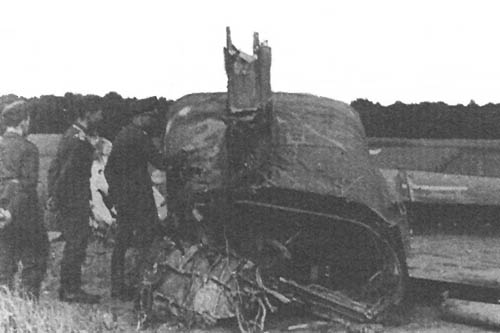 The tail and rear gun turret of LS-L lying on its starboard side.
There is some suggestion that this may be another Stirling bomber (HA-Z) shot down by Ehle shortly after the explosion of Halifax JB837