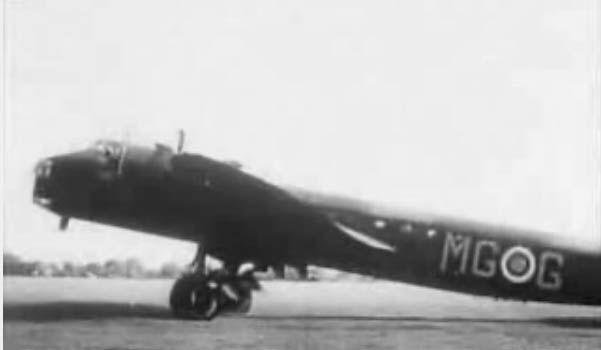 This is a frame from a wartime Movietone Newsreel and shows Stirling MG-G, a sister aircraft to Stirling MG-B: both were based at Oakington.

The Stirling was very agile and praised for its ability to out-turn enemy night fighters and for its good handling characteristics. It was popular with crew because it was much quieter inside than Lancasters but its relative poor altitude ceiling was often a subject of criticism.  When Stirlings were on operations with other RAF bombers which could fly higher, the Luftwaffe tended to concentrate on the Stirlings.

MG-B was believed to carry a nose emblem 'Ale-Itler' and glass of beer motif. It had taken off from Oakington at 23.57 on 25 May 1943 on a bombing mission to Düsseldorf, when it was caught in the blast from Halifax bomber KN-D at an approximate height of 4700 metres (15,400ft) and crashed 2km south of Jülich, Germany.

The wreckage of MG-B. The 'B' of the ID B MG can be clearly seen.
(The ID runs MG-B on the port side and B-MG on the starboard side)

RAF 7 Squadron based in May 1943 at Oakington